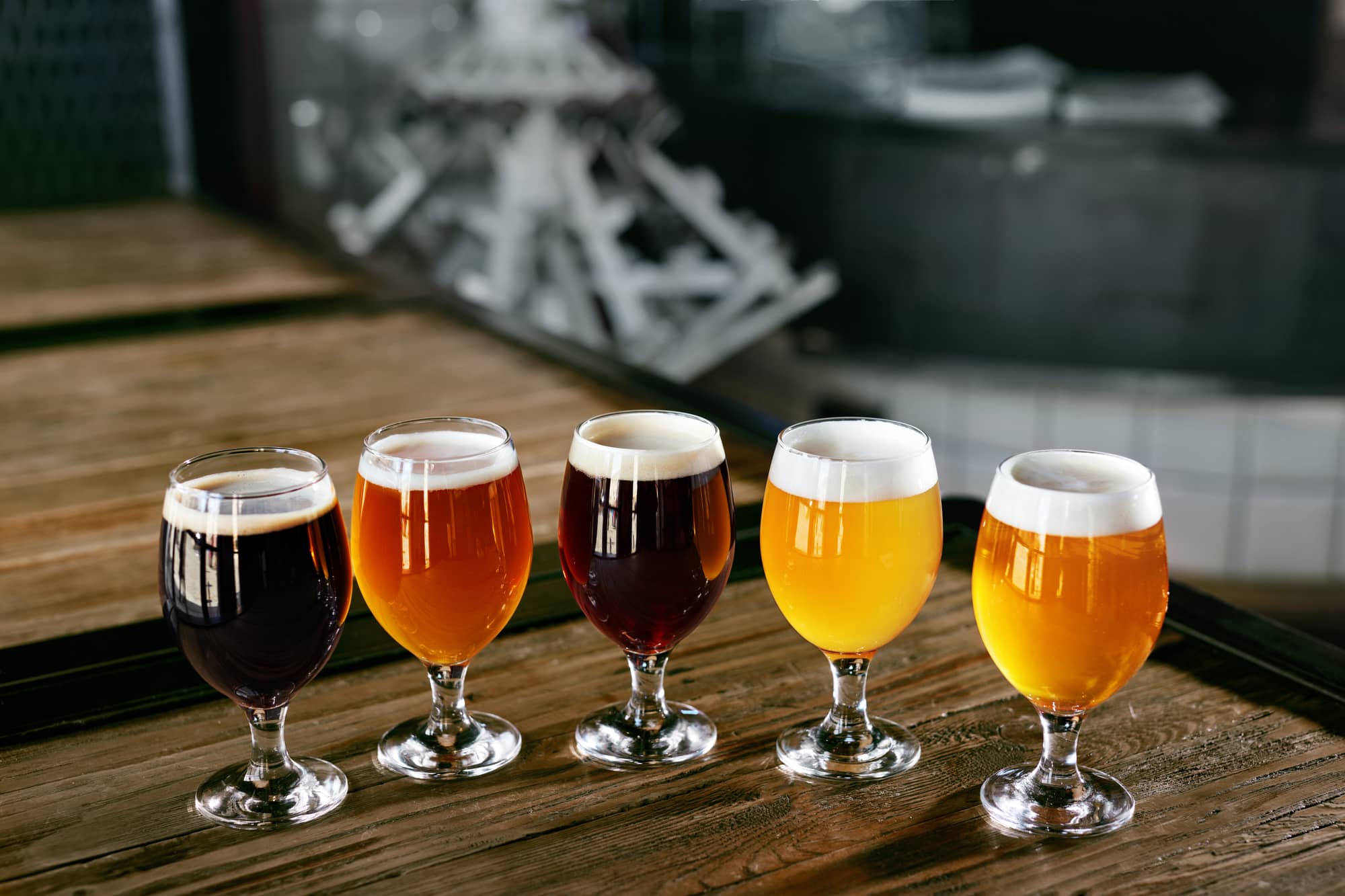 It takes a curious mind to have browsed this topic, or you have to complete some research about the color of beer. Either way, it is quite intriguing how beers develop their colors. Several variables contribute to beer color. In this article, we highlight and explain these factors.

Beer coloration is the subject of a lot of conversation among beer enthusiasts and makers. It is a topic that creates a lot of fun arguments and presents interesting possibilities. Knowing the ingredients that influence the range of color in beer is important. Also, understanding the brewing processes is key.

Here are three things you need to know about beer coloration:

These days, the use of Color Flavor Wheels is widespread. According to claims, these wheels can show you the precise color of your beer. It does this by gauging things like the level of malt or yeast the manufacturers used. Now, let’s go right into the factors that determine beer color.

Almost everyone has heard the phrase ‘Time is money,’ but if you’re grounded in the brewing syndicate, you’ll know this saying: ‘time is color.’

This means one simple thing: the older the beer gets, the more its color will change. As the beer stays longer in storage, additives floating in the beer begin to settle—additives like yeast fall to the storage container base.

This will, in turn, cause the beer to be more resistant to light reflections and look darker. Therefore, regardless of other factors, age will always be a factor in the coloration of dark beers.

On the molecular level, beers should all be the same color. You’re surprised, right? We were too.

But we all know that most beers are either brown or gold. So what gives?

Color differences mean something. There is something crucial that takes place at the molecular level to change beer coloration. The main influencer is the color of grain used in making the beer. Grains are colored by melanin, which produces a rust-red coloration. To change the color of the beer from this rust-red color requires specific chemical processes.

To change the color of beer, you need two types of chemical reactions. They are caramelization reactions and Maillard reactions. Caramelization is the result of heating sugar to the point that it breaks apart. As you may know, grain in the field does not contain sugar. Thus, conversion of grain starch to sugar is an initial requirement. This conversion is done through heat.

As starch to sugar conversion occurs, the temperature rises. The rise in temperature in turn releases more sugar from the starch. What you have after this process is caramel flavor. Some will call it ‘burnt sugar.’  It is important to know that the longer the caramelization process, the darker the beer color. You see a lot of these darker beers in IPAs.

Meanwhile, when you process amino acids with sugars, you get something different. When you process these two through intense heat, you get Maillard reactions. In return, the heat will result in different aromas and tastes. This process also helps with darkening the beer color. There is a famous grain browning process similar to toasting white bread. The heat from the toasting machine darkens the bread. The longer the bread stays in the heat of the toaster, the darker it gets. It is the same for beers too. The longer the grain is heated, the darker the beer.

The toasty flavor in beers is mainly a result of Maillard reactions. Maillard reactions convert amino acids to sugars. This taste becomes the most prominent flavor in beer, but an experienced brewer will find it easy to taste a host of other flavors in a beer.
Two factors play a very pivotal part in this process. These factors are temperature and time. Altering the intensity or longevity of any process can have a significant effect on the beer color. It can affect the aroma too.

Think of what happens when you pluck mangoes and lay them out for too long. Over time, the oxygen in the atmosphere will affect the color of the fruit. Think of any cooked food. If you lay it out in the open, it will decompose, and the look will change. Even the taste will change. This is a result of the oxygen in the air. For beer, oxygen affects the color and the taste. It gives some unexpected flavors and some unpalatable ones too.

Most brewmasters try to avoid the interaction of oxygen with their beers. This is because oxidation tampers with the process of getting the color that they want. Most times, when a brewed beer is much darker in color than it should be, you can blame oxidation.

Depending on the brand of beer and the mode of preparation, boiling times vary. Those who brew extracts advise that beers ought to boil for only an hour. Within ten minutes, the protein in malt extract will coagulate.

Hops need a longer boiling time due to the isomerization of the hop alpha acid. The isomerization helps the beer bittering and it takes one hour. The longer the beer is left to boil, the darker the beer gets—conversely, the shorter the boiling period, the lighter the beer color.

Another important factor that determines beer color is wort gravity. Boiling the wort to a certain level will influence the beer color. The full wort volume should be well boiled. This is better than boiling concentrated wort. It is also better than diluting with water in the fermenter.

But back to boiling as a beer color influencer; old beer brewing methods show that in-grain beers get boiled for one hour and thirty minutes. However, modern research shows that a one-hour timeframe is good enough, especially for beers with light colors and low gravity.

You can do a longer boil, though. It’s necessary if you want higher wort gravity due to higher evaporation. If it is for flavor-altering reasons or style, boil longer. When beer is boiled for a long time at high temperatures, chemical reactions happen. Sugar and amino acids interact resulting in different pleasant flavors. But it should be noted that longer boiling times mean increased melanoidin. This could be a significant factor in wort darkening.

In a nutshell, the longer beer is boiled, the deeper the color.

We have examined the top factors that influence beer coloration. Now, let us look at minor players that contribute to beer coloration. They are not limited to just these, but at the moment, these will suffice.

There are two forms of yeast. They are Low-flocculating and High-flocculating yeasts. The former refers to yeasts that stay floating in beer for a longer time.

The latter is a yeast that settles quickly. The former tends to reflect more light. In comparison, the latter absorbs more light.

When beer is paler than usual, it is a result of a highly acidic mix. Even the makeup of water can affect it. Meanwhile, it is very likely that as the pH levels fall, beer color could lighten up a bit. The main thing that leads to this is the loss of color by some molecules in fermenting beer.
There is a natural law with ph levels in beer coloration. That is, the denser the acidic mix, the deeper the color of the beer.

Particles of polyphenols and acid tend to remain when the level of hops use escalates. This is a factor that can trigger a lightening up of the preconceived beer color.

Thus, the level of Hops in beer needs monitoring. For darker beer colors, you need fewer hops. If you are going for a lighter color, then add more hops to your beer mix.

Adding something that’s not always used for beer making to your beer mix can change its color. For example, if you add strawberries to your beer, it will likely influence the color. If you add lime to your beer, the color could be different. Things like syrups and the like will also influence beer coloration. These substances will also affect its taste.

If you want to make such additions, be sure to carry out adequate research to give you an idea of what your final brew might look like.

When you look at a beer, you somehow can tell, to some extent, how it will taste. Beer colors help you guess at the taste of a beer, but it does not determine it.

You can guess that a beer with a lighter color will taste like lightly toasted bread. It could taste like new baked bread or biscuits.

When the beer is a bit darker, you can guess that it tastes like toffees. The correct guesses will be similar to cocoa flavor and the like, should it have a dark color.

These are mere guesses because the color of a beer is pretty easy to alter. A small addition of any substance could change the beer’s appearance instantly. This might be a contrast to what it tastes like.

Thus, color can be deceptive. Flavor wheels try to make assumptions, but grain is the dominant factor for flavor.

Beer connoisseur says that you can make a double-digit ABV Belgian Tripel and one that is pale gold. All you have to do to make this happen is use pale malts and simple sugars (which may add no color at all). Additionally, it’s also possible to generate a German Schwarzbier (black lager) with less than 4 percent ABV. You can do this by using roasted malts in minute doses.

It is safe to say that it is a misconception that color predicts beer flavor. Do not judge a beer flavor by its color.

The concept of measuring beer color is intriguing, starting from the design of the scale of measurement.

To measure beer color, you need the Standard Reference Method (SRM) scale. This calculation uses light of a unique wavelength passing through one centimeter of beer. Afterward, the amount of light absorbed by the beer is then calculated.

Measurement results on the SRM between 2-5 are deemed as gold or pale. These are styles similar to light lagers.

Scale results between 7-15 are considered amber.

Measurement results that fall between 16-25 are deemed copper brown.

Also, 25-39 shades are deep brown or black. But 40 and above get certified as black or opaque. An example of a 40 is an imperial stout.

On a Final Note

We have delved into the factors that influence beer color while establishing that color does not determine flavor.

Yet, you won’t be wrong to feel that lighter-colored beers have grainy tastes. In contrast, darker ones have coffee flavors. You now have an exhaustive look into what makes your brew look the way it does. Go grab yourself a bottle! You’ve earned it.