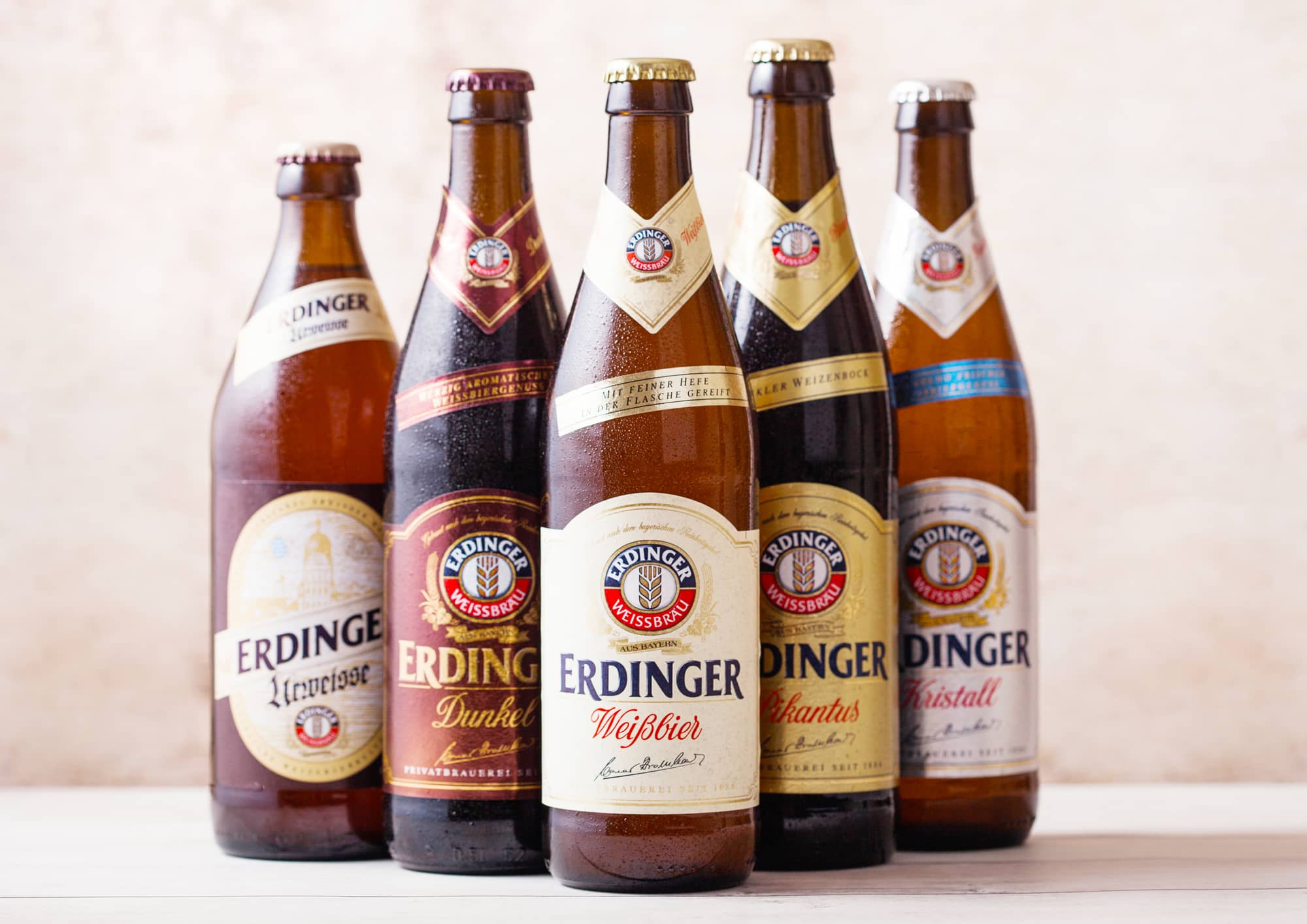 Germany has a long and proud beer-related history, so much so that they even rival the Belgians for the best beer culture on the planet. German monasteries first started brewing the good stuff back in 1000, and the tradition only evolved to create better products over time.

Beer is a staple of German society, and at one point, even children drank it, although that practice certainly wouldn’t fly today! Even so, Germans still celebrate beer throughout their country.

Oktoberfest, Munich’s premiere festival, celebrates beer, food, culture, and tradition. But, even if you can’t get to Munich, you can still try some out-of-this-world German beers.

Let’s start our list with a real doozy: Rubsam & Horrmann Brewing Company’s “Catoberfest.” It’s a rauchbier, a heavy smoky, malty treat that some people compare to drinking a ham sandwich.

Rauchbier is a unique German beer, and Catoberfest does it well by infusing plenty of smoke and malt into their beverage. The result is a beer that’s profoundly smoky and full of applewood malt while still being drinkable.

Rauchbier is an acquired taste, and many people find it too strong and unfamiliar for their palate. Still, you never know; you might fall in love with the style.

Since you can rarely get rauchbier outside of Bamberg, Germany, Catoberfest is a real treat.

Kolsch is a German beer style that is just effortlessly drinkable and easy on the palate. At their best, kolsches are very crisp, refined lagers, and Gaffel’s “Kolsch” certainly fits the bill.

Kolsch isn’t an easy style for craft brewers to perfect because there are virtually no gimmicks to hide behind. Instead, you need to be an expert brewmaster to hit the right notes between malt and hops.

Kolsch isn’t a trendy style in the United States, but it’s certainly catching on. People are starting to realize that it’s an excellent summer beer option that could easily take the place of a shandy or pilsner.

What makes Gaffel’s Kolsch so impressive is its attention to detail. Pour a glass of crisp Kolsch, and you’ll find a lemony-colored beer with a bright mouthfeel and virtually no bitter aftertaste.

Although Americans have tried to perfect Kolsch, it remains a predominantly German beer. So do yourself a favor and pick up some Gaffels from across the pond.

Schwarzbier is another uniquely German offering, and it’s certainly something that every beer lover needs to add to their collection. Kostritzer’s “Schwarzbier” is a thing of beauty: chocolatey, malty, and rich without being overwhelming.

This beer goes deep, with robust malt tones. But, on the other hand, it’s highly drinkable. Unlike other maltier brews, drinking a Schwarzbier isn’t the equivalent of downing a beer milkshake.

You won’t feel full, but you will enjoy the full spectrum of malt. Schwarzbier is German for “black beer,” but it’s neither bitter nor heavy, unlike stouts.

Kostritzer does a great job with this style, incorporating malt, pumpernickel, and chocolate into the brew for a surprisingly layered beer with a light body. It should come as no surprise; Kostritzer has been around since 1543 and knows what they’re doing.

If you want to try out one of Germany’s most exciting beer styles, pick yourself up some of Kostritzer’s Schwarzbier.

Ayinger’s “Oktober Fest-Marzen” is a traditional Oktoberfest-style beer that hits all of the right malty notes for a smooth finish. They start brewing this intensely popular style beer in March, and bottles fly off the shelves by the time they’re available in late summer.

One of the reasons Oktober Fest-Marzen is so popular is that it adheres to traditional Marzen brewing methods. This foundation allows Ayinger to incorporate just a touch of artistic license into their work.

It also helps that Ayinger’s brewery is in Munich, the heart of where Oktoberfest takes place every year. This proximity allows them to tap into the culture of the city and influence their beer accordingly.

Even if you’ve had other Oktoberfest beers, you probably haven’t tasted anything quite like Ayinger’s offering. Subtle notes of oranges and tobacco mingle with the malty flavor that gives this beer its distinct taste.

Pick some up for your next Oktoberfest party; it’s bound to impress your guests! You should also make sure that you have a stash just for you.

Although dunkel is German for “dark,” Weltenburger Kloster’s “Barock Dunkel” is a medium-colored beer that is easily drinkable. It spans different seasons, tasting just as good in the fall and winter as it does in spring and summer.

If you’re looking for a versatile and delicious beer that tastes both familiar and new, check out Barock Dunkel. Barock Dunkel uses Munich malt, which tends to be heavy on the caramel flavor and gives a sweet touch to the beer.

Light caramel flavoring works better than other sweeteners, like vanilla, because it’s far more subtle. This beer will remind you of a dessert without making you feel like you’re eating a caramel creme brulee.

Barock Dunkel also has very faint notes of chocolate at the finish, which cuts way back on the bitterness and makes it an excellent beer for beginner beer drinkers and beer lovers alike.

Weltenburger Kloster is one of the oldest breweries in Germany. The monastery opened in 45 CE, and they started brewing beer officially in 1050.

To say they know their stuff is an understatement. Barock Dunkel is a triumph of German beer and something you simply have to taste to believe.

Paulaner is one of the most famous German breweries in the United States, but most people gravitate towards their pilsner. Do yourself a favor and check out Paulaner’s “Salvator Doppelbock.”

This beer comes in heavy at 7.9 percent alcohol and is chock-full of goodies like spicy hops, figs, chocolate, and caramel malt. It’s a robust, bold beer with a heavy malty hand.

Salvator Doppelbock is one of the oldest beers of this style. It dates back to the 17th Century when the monks of St. Francis of Paula came up with the style to enjoy liquid bread during Lent.

Today, the formula is pretty similar to how those crafty monks brewed it all those years ago. You’ve probably never tried anything like it, and you’ll be thrilled when you do.

Spaten generally has a big and festive beer tent at Munich’s Oktoberfest, and you know that they’re serving up some phenomenal beer there. One of their top offerings has got to be “Oktoberfest.”

As with Ayinger, Spaten starts brewing their Oktoberfest in March, well before the official start of party season. Their take on this classic beer relies heavily on roasted malt and more than a touch of sweetness.

Spaten’s Oktoberfest is a brown beer that’s not too heavy but layered enough to contain caramel and earthy notes. At 5.9 percent alcohol content, you can have a pint or two without worrying about missing the festivities.

Pilsner is the cornerstone of German beer tradition, and very few Bavarian brewers do it quite as well as Rothaus. Their “Pils Tannen Zapfle” is an excellent example of this style of beer and an excellent one for you to add to your summer beer mix.

German immigrants brought pilsner with them when they immigrated to the United States, but something was lost in translation. Over time, pilsners lost their unique flavor profiles and became one-note beers.

Experience authentic pilsners with Pils Tannen Zapfle, and you will never go back to substandard pilsners again. Pils Tannen Zapfle comes from Germany’s Black Forest region, and many experts think it is one of the best examples of that style in the world.

Hefeweizen is a Bavarian-style beer usually served in a tall glass so that you can appreciate all of its golden haziness first-hand. Weihenstephan’s “Hefe Weissbier” is a fabulous example of this style that makes for ideal summer sipping.

Hefe Weissbier is a German wheat beer that is heavy on yeast and exceptionally refreshing. You can find lighter fruit notes in this beer, like bananas, cloves, and pears, but they’re not overpowering at all.

Since Weihenstephan is the oldest brewery on the planet, they’ve had plenty of time to perfect this iconic style. If you want to try the absolute best example of a hefeweizen, you need to get your hands on this beer.

The brew itself is sunny and flecked with hazy bits of wheat. The beer’s thick head tends to be a bit deceiving; despite all of the foam, this beer is easy to drink and not heavy in the slightest.

Once you’ve had Weihenstephan’s Hefe Weissbier, it will be tough to go back to lesser hefeweizens. Since it tends to sell out quickly, it’s stock up when you see it in the stores.

How To Brew Non-Alcoholic Beer