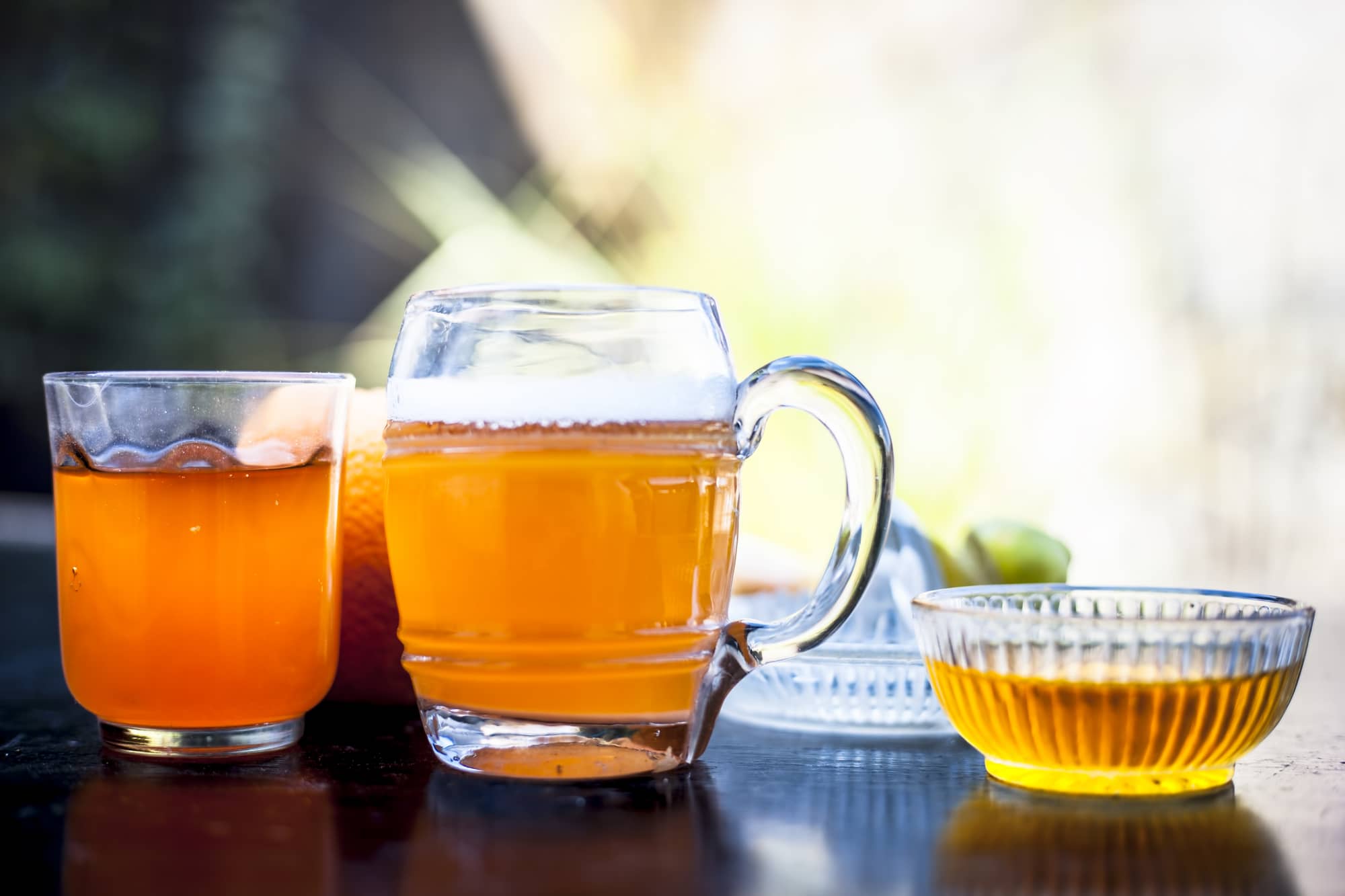 Peanut butter honey blonde, orange honey ale, honey spice wheat beer—A honey beer is hard to deny, regardless of the season. But, brewing a batch of beer with honey carries far more benefits than its intrigue.

Honey can increase alcoholic content, lighten beer body, sweeten harsh flavors, improve bottle condition, and much more. Let’s take a look at the multitude of ways you can improve your brew with honey.

Honey beers are becoming increasingly popular, but brewing with honey is far from new. Mead, an alcoholic beverage of fermented honey and water, has been around since the 7th millennium BC.

Ancient drinkers believed mead had valuable health benefits, and they weren’t entirely wrong. Honey is anti-inflammatory, antimicrobial, and a healthy alternative to other sugar additives. Before I go over the composition of honey, let’s talk about its impressive production.

Understanding this process will be necessary when we go over pasteurization.

Honey bees suck nectar from flowers, place it in their crop (honey stomach) then transport it to the hive. During transportation, the nectar mixes with crop enzymes and transforms into a more sustainable substance.

Once at the hive, the transporter regurgitates nectar into another bee’s mouth. This process continues until the nectar lands in a honeycomb.

The colony then fans the nectar to remove the excess water content until it thickens. The honey is sealed with beeswax and stored as food.

Glucose and fructose account for 70 percent of honey and are 95 percent fermentable sugar. Hence why brewing with honey is genius.

Honey’s unique make-up is versatile, providing beer brewers with an array of opportunities.

I recommend using raw honey from a local beekeeper as it carries more robust flavors, scents, and nutrients.

The flavor of honey you use depends on the honey variety available in your area and the beer you’re brewing. There are over 300 types of honey in the United States alone. Let’s take a look at a few of the most popular.

Alfalfa honey is common in the Western states. It has a grassy flavor with traces of vanilla. The mild taste complements most beers but is popular amongst herbal brews.

Dark Buckwheat honey is bold-flavored and typically grown in the Northern United States. It’s less sweet than other types and the darker honey is best in a stout or porter.

Clover honey is the United State’s most prominent honey. Its mild taste is best in lighter beers, like lagers.

Tupelo honey swings sweeter than other flavors. The honey is produced alongside river swamps in southeast states and is considered a delicacy and slightly more expensive. Tupelo’s sweet syrupy taste works well in ales.

When To Add Honey

When to add honey during the brewing process is a never-ending debate. The argument surrounds whether or not brewers should pasteurize their honey.

Should I Pasteurize My Honey?

But, some brewers believe honey’s microorganisms can activate and contaminate beer when provided the proper environment, such as wort or water. I understand the caution but haven’t found research explicitly supporting this claim.

Other brewers acknowledge that pasteurizing honey depletes its character and defeats the purpose of using it at all. This view isn’t an unreasonable argument considering the average beer drinker would expect honey to contain at least subtle sweetness.

When you add honey is a personal choice. I’m just here to provide you with the information you need to make the best choice for you.

Adding Honey to the Boil

Adding honey to the beginning of a boil increases the alcohol level but destroys any associated taste or smell. Since the sugar in honey is 95 percent fermentable, most of the character ferments away if boiled.

This process is a good choice for brewers interested in using honey as an alternative to regular sugar or malt.

Adding Honey to the Wort After Pasteurization

Many brewers believe adding honey to the beer wort after you’ve pasteurized it is a safe median as small traces of honey flavor and delicate aromas will remain. Here’s how it works:

Adding honey during fermentation preserves more character and adds fermentation time. I recommend adding it as soon as high krausen ends, meaning there’s no longer an extremely foamy top. The honey will balance out bitter notes and improve mouthfeel.

Before adding the honey, heat it in warm water (without diluting it) so it’s easier to pour. Remember that honey is highly fermentable, so don’t be alarmed if fermenting takes longer.

This step can be combined with one of the above processes or done alone. Priming your beer with honey after fermentation leaves a sweet smell and taste. First, dilute the honey by boiling one cup in 16 ounces of water. Simply pour the honey mixture in your bottling bucket, then rack as usual.

Brewing with honey takes practice but can significantly improve beer once nailed down. The versatile ingredient can increase alcohol content or bring an intriguing flavor, scent, and even mouthfeel to your brew.

Can You Drink Expired Beer?

How Much Does Moonshine Cost?