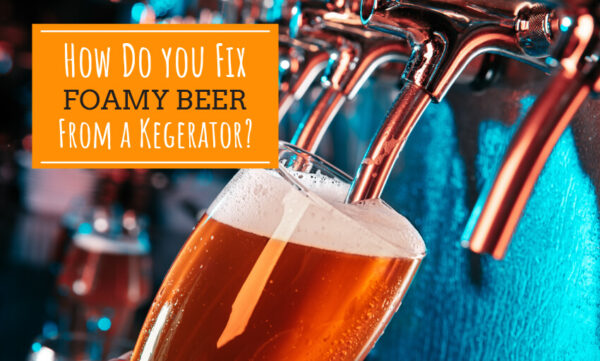 The are many fantastic benefits gained by serving your home brew from a Kegerator. For starters, using a kegerator makes it simple to store beer at the perfect temperature, ensuring your brew is delicious every time. There are also significant cost savings as you don’t have to buy bottles or spend time cleaning them.

Although a kegerator is a reliable way to serve beer, technical issues can occur. One of the most common problems that home-brewers experience is that their beer is too foamy.

Lets take a closer look at the reasons why a kegerator might produce foamy beer, then offer a simple step by step solution for fixing this common issue.

Before I share the most common reasons for a kegerator producing foamy beer, let’s take a quick look at beer foam physics. This will help you understand the reasons for overly foamy beer occurring.

Beer foam is created by a complex interaction involving carbon dioxide (CO2), your beer, and pressure changes. A kegerator works by applying carbon dioxide pressure on a keg in order to push the beer upward and out of it. The beer that is released contains dissolved CO2.

As the beer leaves the highly pressured environment keg and enters your glass, the atmospheric pressure changes. This pressure change triggers ‘Henry’s Law’ which states that the amount of dissolved gas in a liquid is proportional to its partial pressure above the liquid.

For those of us without chemistry degrees, this principle means that the CO2 in your beer will attempt to escape until there is a pressure equilibrium with the CO2 in the atmosphere.

The atmospheric pressure of CO2 is about 0.006 pounds per square inch (40 Pa) at sea level, while the CO2 dissolved in your beer is 12 to 30 psi (83 to 207 kPa). So, there is a lot of CO2 trying to escape your glass. It’s important to note that cold fluids can hold more CO2 than warm ones, which is why incorrect beer temperature is a common cause of foamy beer.

As the CO2 attempts to diffuse into the air, it will form bubbles. While moving through the beer, these bubbles will attract hydrophobic compounds in the beer. These compounds form a protective layer around each CO2 bubble, which allows the CO2 to form a foamy head at the top of the glass.

What Causes A Kegerator To Pour Foamy Beer?

Before you begin looking for mechanical or operational issues with your kegerator, take a closer look at your beer pouring technique. The most common pouring issues include:

The vast majority of foamy beer issues are caused by Incorrect temperature. If a beer is too cold or too warm, it will affect how much CO2 is absorbed by the beer and how the beer will react when exposed to atmospheric pressure. Temperature problems can be caused by several issues including:

Excessive CO2 pressure will infuse too much CO2 into your beer, potentially causing excessive foam. Too little CO2 can cause your beer to be flat. Setting the right CO2 pressure can take some trial and error, as factors like beer line size and environmental factors come into play. I’ll share some tips on setting CO2 pressure in the checklist below.

If air enters the beer line, it can cause a ‘burping’ effect when you first open the tap. This burp can shake up your beer, allowing the CO2 to escape much faster, creating a lot of foam.

The most common cause of air entering the beer lines is an incorrectly seated keg coupler. In most cases, this is due to incorrect sizing or because the coupler isn’t screwed in tightly enough. Holes in the beer line can also cause air to enter the lines.

There several problems that can affect the beer lines and cause foamy beer:

Moving your keg just before it is to be used is a common mistake that many people make. If it has been recently agitated, it could caused faster CO2 diffusion, which leads to foamy beer.

Related: What is Kegging?

How To Stop A Kegerator Creating Foamy Beer

So, that’s a pretty long list of things that can go wrong. To help you go through this list in the most logical way possible, we’ve created a simple 6 step check list to follow. They are organised form the mostly likely issue to the least likely.

Step 1: Check the temperature of your beer

As mentioned earlier, temperature is the most common reason for a kegerator to produce foamy beer. Most beers should have a temperature somewhere in the mid to low 40’s Fahrenheit (5 to 7 degrees celsius). However, this can vary based on the style of beer you are producing, the CO2 level, and other factors.

The simplest way to check the liquid temperature of your beer is to place a glass of water in your kegerator with a liquid thermometer in it. Place the glass near the bottom of the keg (without touching it). Give the glass some time to cool, then check its temperature.

If you just installed a new keg, be aware that it may need anywhere between 24 to 72 hours to get to the right temperature. Additionally, be aware that any beer that is in exposed lines may be warmer, so the first couple of seconds of pour may produce foamy beer.

Temperature issues are responsible for about 90% of cases of foamy beer. So chances are, this simple tip will fix your foamy beer problem immediately.

Problems affecting the beer lines are the next most likely culprit of a foamy beer. Remove your lines and give them a clean. If they are quite old, replace them with new lines. Beer lines are cheap, so it’s a good idea to change them out regularly, anyway. Use 3/16” beer lines if possible as they provide a good pour rate.

Next, we’ll check that your beer line is set up correctly. Start by checking the length, which should be anywhere between 4 to 10 feet (5 to 8 feet is ideal). The key is to avoid very short or very long lines as they are more likely to cause problems.

Check the diameter of the beer lines. As mentioned a moment ago, 3/16” lines are ideal. Other sizes can be used, but once more, avoid the extremes. Make sure the beer line is above the top of the keg, to reduce the risk of air getting into the line.

Now is a good time to check that your coupler is correctly installed. Check that it is the right size and that it is screwed on tightly enough. Make sure no air is entering the line near the coupler.

Although you might think the CO2 regulator is the first place to look if you have foamy beer, it’s less likely than temperature or beer line problems. CO2 regulators are generally reliable and simple to setup.

The best pressure setting for beer is usually 10 to 14 PSI. However, if you are having foamy beer issues, bring it back down to 5 to 6 PSI, and pour a couple of beers. If they pour reasonably well (not overly foamy), gradually work your way back up to 10 to 14 PSI, increasing each pour by 1 or 2 PSI.

Be aware that you may need to tweak your PSI after changing a keg, as each batch of beer might have different requirements. However, if you do encounter a foam problem, always remember to check for temperature issues before changing your CO2 regulator.

There is also a small chance that your CO2 regulator may malfunctioned. This can occur if it was is dropped or impacted by a hard object. This guide explains how to perform a soapy water spray test on your CO2 regulator to confirm it is working correctly.

Step 5: Check that you are pouring your beer properly

To correctly pour a beer, place the mouth of the glass just below the faucet mouth, without touching it. Hold the glass at a 45 degree angle and flick the tap open in a single smooth motion. Bring the glass into the upright position once it is 50 to 60% filled. If you are unsure about your technique, check out this video.

As mentioned earlier, the type of glass you use is also important. Use a clean beer glass that is room temperature.

If none of the above have worked, think about the condition of your keg. Are you sure the the keg has been sitting in the kegerator for a sufficient length of time? Has the keg been moved recently? Is the beer in the keg reasonably fresh?

So, there you have it, a simple 6 step method for resolving foamy beer problems. If you have any questions, drop us a line or read the other articles on kegerators on the website.