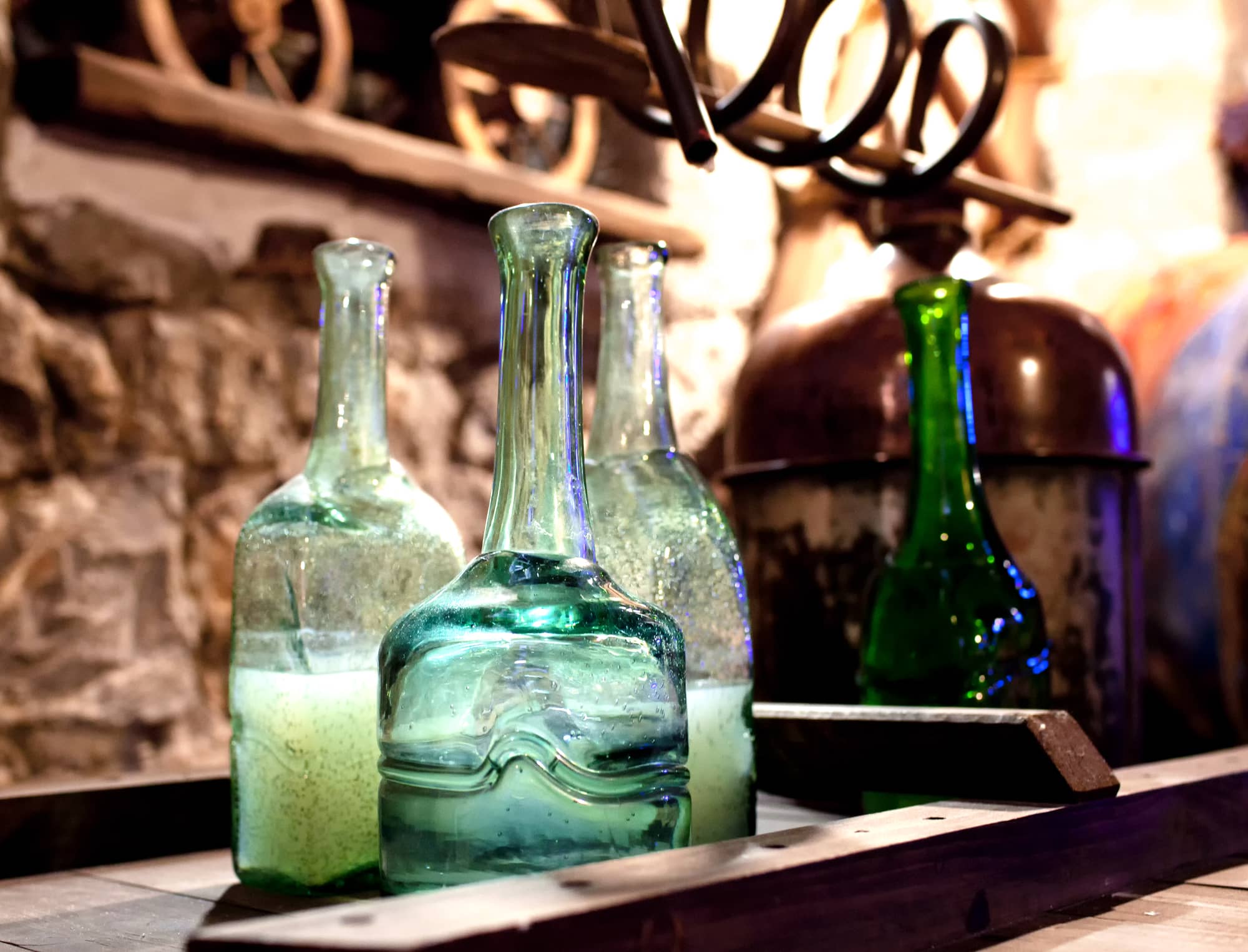 What’s in a name?

Well, in the case of moonshine: a lot of history and more than a little bit of mystery.

If you’re like me, when you think of moonshine, you likely picture a torrid past filled with bearded bootleggers, stock cars racing from the law, and other criminal misdeeds. As it turns out, all of those scenarios feature heavily in how it got its name.

Here’s a closer look at moonshine’s one-of-a-kind moniker, including what it means and how it relates to the history of this infamous potent potable.

Why the Name “Moonshine?”

Moonshine is an un-aged whiskey made from grain, usually corn. So, why is it called moonshine, instead of the more obvious alternative names such as:

The answer, as with many things related to ‘shine, involves crime.

During the heyday of American moonshine production, back when it was wildly illegal, distillers would make batches of alcohol at night. Why night? Because the distillation process creates a plume of smoke, which would act as a sign reading, “Hey authorities, illegal spirits are being made here, come bust these people.”

Darkness obscured these telltale smoke trails. But that’s not the only method moonshiners used to evade the law. They also placed their stills deep in the woods to add an additional layer of secrecy.

Of course, any type of artificial illumination was also a no-go, as the light would give the location away. So, distillers would operate under the light of, you guessed it, the moon.

The Surprising British Origins of the Term

It’s probably no surprise that moonshine is made in the moonlight, but there’s a twist to the tale. American distillers didn’t create the term in the 1860s. Instead, it originated a century earlier and an ocean away.

In the late 1700s, the town of Wiltshire, England, had something of an image problem. People from surrounding areas referred to them as “moonrakers” and told stories of how Wiltshire men once mistook the moon’s reflection in a local pond for a wheel of cheese.

But it turns out the people of Wiltshire had the last laugh. They played up the idea of moonraking as some type of bizarre, perhaps feeble-minded local pastime – and local men went so far as to actually hang out by the local ponds at night, attempting to catch the moon’s reflection with nets.

Except the whole thing was a cover story for their brandy smuggling operations. They’d retrieve their illicit kegs from the ponds, and the local authorities were none the wiser. The name the smugglers gave to their smuggled liquor? Moonshine.

The English, Scottish, and Irish settled early mountainous regions in colonial America. They brought along their liquor recipes but had to alter the ingredient slightly based on what was available. Instead of spirits made from wheat and rye, they used corn.

Corn whiskey was popular and legal throughout the colonies. Because the demand for alcohol was so high, people who made it had no shortage of customers, and they also used it for bartering. It was practical, too. Corn was plentiful, and if you had an excess, its liquid form was easier to store than bags of grain.

For a while, makers of corn whiskey were living on easy street until the newly-formed federal government started to run out of money. Burdened by debt from the Revolutionary War, Treasury Secretary Alexander Hamilton created the Whiskey Tax.

Perhaps not surprisingly, taxing the most popular drink in the country didn’t go over well. Farmers, distillers, and other citizens eventually clashed with a federal militia led by President George Washington. Known as the Whisky Rebellion, it was the largest clash between Americans from the country’s formation up through the Civil War.

Why Appalachia Is Commonly Associated with the Term Moonshine

The federal government stopped the rebellion and also made changes to the law. Over time, the country cooled. But resentment still simmered among distillers against this far-away federal government and their ability to impose taxes.

Most distillers paid the tax, but not all. The ones who outright refused then moved their stills away from society. Even though they used corn instead of wheat or rye, the liquor produced was still clear, white, un-aged whiskey, and – perhaps most importantly – illicit. The term moonshine fit perfectly.

Aside from not wanting to pay taxes, many distillers simply couldn’t. Rural, mountainous regions, such as the Appalachian Mountains, offered few economic opportunities. Moonshine provided a way to earn extra income, especially for farmers when times were hard – and every cent earned mattered.

The Modern Usage of the Term Moonshine

Today, the term “moonshine” refers to two types of the same spirit.

First, there’s legal moonshine. A few years ago, the US government relaxed certain liquor laws, and now many large distilleries can legally make and sell moonshine. It’s the same recipe used back in the day, only without the legal risks, and produced in much more hygienic and well-regulated conditions.

But “moonshine” is also used to describe any type of illegal liquor. For example, throughout Prohibition, bootleggers made moonshine using white sugar instead of corn, which produced a cheaper product and, therefore, more profit. Technically, they were making rum. So, “moonshine” doesn’t always have to refer to whiskey.

The second term mainly exists in a historical context. When most people refer to moonshine, they’re referring to the first, legal type. Fortunately, barring some exceptions, moonshine is legal to own and even make with a home still (of course, you’ll want to double-check the specific laws in your area).

There’s far more to the name moonshine than many people realize! It’s a word that traveled across a continent and came to represent an entire era of American history – and you can experience that history for yourself by trying some moonshine today.

How To Make Hard Root Beer At Home

How To Infuse Beer With Helium