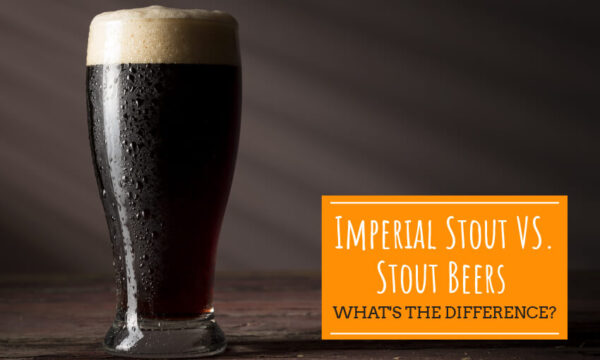 Renowned for being some of the strongest beers, stouts are complex brews, often appreciated by only the most daring beer enthusiasts.

However, there are many sides to this mysterious lord of beers. And surprisingly, it isn’t always as dark and alcohol-heavy as people make it out to be.

Stouts come in many varieties, ranging from the sweet, silky brews made with vanilla beans to the more rounded, roasted flavors. One of these types is the Imperial stout, and true to its name, it’s a beer fit for royalties.

But, how does it vary from a regular stout?

We detail everything you need to know in our Imperial stout vs. stout beers comparison. In a few moments, you’ll know their differences, the best ways to drink and serve them, and choice Imperial stout brands.

What is Stout beer?

Traditionally, the word ‘stout’ was a generic term, used to describe the thickest and strongest beers, usually 8 percent abv—alcohol by volume—and above. They weren’t exclusively the darkest beers, either, as we know them today.

Eventually, however, it became exclusively associated with a porter—a very dark beer—particularly the hardier varieties. That’s probably also why it’s now more of a synonym of dark brews.

There are many kinds of stouts worth mentioning that have nothing to do with dark beer porter, including:

What is Imperial Stout?

It came to be during the 18th century, London, England, following inspiration from the Baltic Porter beer. The type has a high alcohol content of at least nine percent abv and is among the darkest beers available.

A recipe from 1856 discloses that Imperial stout had an original gravity of 1.101 and exceeded 10 pounds of hops per barrel. That suggests it contained over 10 percent abv.

The name ‘Imperial’ came to be since breweries were exporting the stout to the Baltics, most famously, the court of Catherine II of Russia. Probably the earliest example was the Thrale’s Entire, a now extinct beer.

Over the centuries, several countries have recreated the Imperial stout, like the Danish Wiibroe Brewery, who launched a milder, 8.2 percent version in the 30s. Then in Canada, we had Fritz Sick and Molson in the 50s.

The strong beer also gained popularity in the US, where the first brewery to take on the Imperial stout was Bert Grant’s Yakima Brewing.

What is the Difference Between Imperial Stout and Regular Stout?

What makes an Imperial stout stand apart from the standard stout is mainly the alcohol percentage. This style has above nine percent abv, whereas the regular typically contains seven to eight percent abv.

The taste also differs between the two. Imperial stouts have a similar flavor to dry stouts, but with a more prominent kick of alcohol.

It isn’t as sweet as other stouts, although some US variations have incorporated vanilla beans, maple syrup, and even chili.

Another difference is in how long do Imperial stouts last. Since brewers produced them for export; they had to be long-lasting. To increase their shelf life, brewers amped up the alcohol percentage, ensuring that the brews would remain consumable after a long journey.

The Best Way to Enjoy Stout and Imperial Stout

When it comes to Imperial stout vs stout beers, there are some differences in how best to enjoy them.

For starters, the temperature should be right. With standard stout, you want to find a sweet spot between 45 to 50 degrees Fahrenheit.

So, how do you drink Imperial stout? Well, because it’s a heavier, maltier beer, most recommend that you consume it warm.

Next, at what temperature to drink Imperial stout? We’d say keep it around 50 to 55 degrees Fahrenheit, then serve with a steak or lamb chops.

Imperials stout brands have made a comeback in recent years, and there are a few notable names:

As you can see, where it concerns Imperial stout vs stout beers, there are some significant differences. Standard stout is typically a dark, strong beer, best served at medium temperature.

Imperial stout, however, is a sub-category, famous for being exported to the Baltics. It’s very alcohol-heavy, with some variants containing more than 14 percent abv.

The best way to serve Imperial stout is at a warm temperature—pair it with a steak, and you’re good to go.