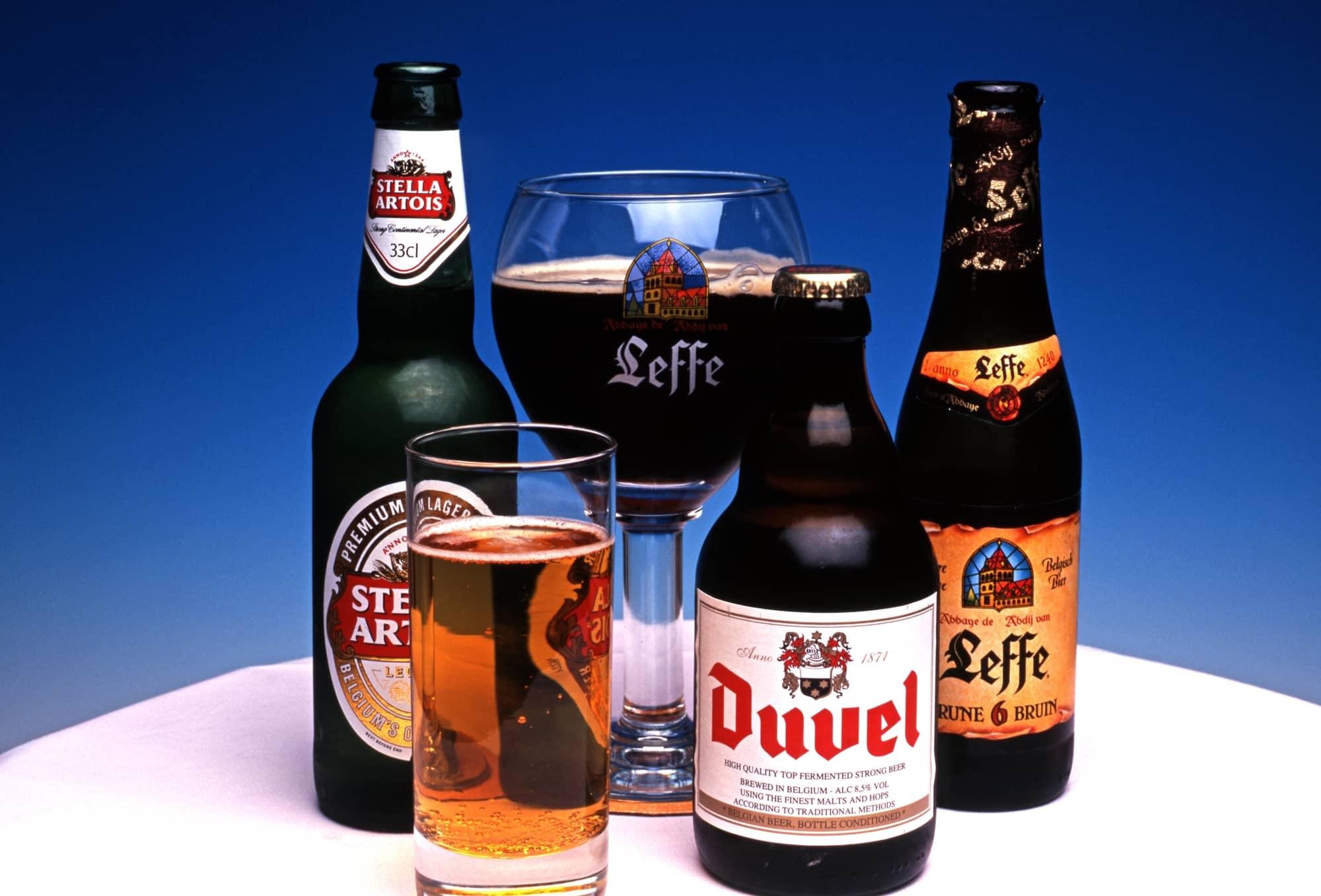 There are few things as satisfying on the planet as a world-class Belgian beer. Belgian brewing culture is steeped in tradition and widely considered to be the pinnacle of brewing.

If you can’t make your way to a Belgian monastery to try a pint for yourself, there’s good news; Belgian beer is now exported and available worldwide.

One of the things that genuinely sets Belgian beer brands apart from the rest is their abundance of different beer styles. This small European country has something to offer everyone, from crisp and fresh Saisons to deep sour beer.

Notable for its iconic pink elephant logo, Delirium Tremens is one of Belgium’s most popular beers. Although the brewery experiments with different variations on their signature beer, including holiday versions, the original stands the test of time.

Pour a pint of Delirium Tremens, and the first thing that you’ll notice is its deep golden hue and heady aroma of spice and grain. You could also pick up the faintest hint of clove and pear.

Delirium Tremens starts off warm and honeyed, but the last notes of this beer are a bit bitter. The contrast is what makes it a true superstar in the Belgian beer category.

It’s layered, slightly unpredictable, and downright delicious. If you find yourself in Brussels, make sure that you check out Delirium Tremens’ cafe, where you can sample 200 different types of beers.

Saisons are the most drinkable of all the Belgian beers. These pints are perfect for enjoying on a summer day or sharing with friends.

Ardenne Saison is an excellent example of this beer style. It’s both rustic and elegant with a comparably low ABV that hovers right around five percent so that you can enjoy two!

Ardenne Saison strikes the right notes of dryness and bitterness, and these flavors are balanced beautifully by just the right amount of citrus. But, ultimately, what makes this beer pop is that it walks the tightrope between fruity and hoppy so expertly.

Sour beers are certainly not for everyone. Some people love the taste of a good sour, and others feel like they’re drinking a pint of vinegar.

If you like sours and aren’t afraid of bold flavors, Monk’s Cafe Flemish Sour Ale is right up your alley. It’s an expertly crafted beer that isn’t afraid to embrace the funky, sour side of things.

Unlike many of the other beers on our list, this one doesn’t come from Belgium. However, it’s made so well that you’d be forgiven for thinking it originated in Bruges.

This Flemish ale comes from Philadelphia’s Monk’s Cafe and is a sour brown beer. Its combination of deep sweetness and biting sour is innovative and bold.

You’ll either love it or hate it, but you certainly should try it at least once.

If you know anything about Belgian beers, you’ve probably heard of the name “Chimay.” It was one of the first Belgian beers to make it across the pond.

Chimay Grande Reserve, also known as “Chimay Blue,” is one of the brewery’s finest offerings. This excellent beer is notable for its deep brown, almost chestnut color, and heavy fruit flavors.

Chimay Grande Reserve was initially rolled out in 1954 as a holiday beer, but its popularity prompted the brewers to produce it year-round.

One of the critical aspects of this classic beer is its complexity. Malty and hoppy flavors mingle with stone fruits.

Chimay Grande Reserve is a profoundly layered dark beer that’s pretty much a work of art.

Although many Belgian beers are too heavy to drink on a hot, sunny day, Saison Dupont is an exception. Since 1844, Brasserie Dupont has been perfecting this fruity, dry Saison.

Like many of the best beers on our list, what sets Saison Dupont apart is its ingenious, delicate balance of flavors. They hit all of the right bitter notes without going over the top, and there’s an intriguing bit of spice on the back end of this delicious beer.

Since Brasserie Dupont has had over 150 years to perfect the recipe, you know that you’re getting a solid Saison made of the best ingredients that Belgium has to offer.

If there’s one beer that simply screams “celebration,” it’s Duvel. This decadent golden ale clocks in at an impressive 8.5 percent alcohol content and is packed full of fruit and malt.

Duvel is one of the signature beers of Belgium. It’s one of the first beers that most people outside of the country have heard of and an excellent example of Belgian beer tradition.

The first thing that you’ll notice about Duvel is its deep, balanced sweetness. The brewers have perfected the art of adding just the right amount of malt to their brew, and it shines through in just the right way.

Secondly, you’ll pick up on the fruit. Unlike some fruity beers, Duvel isn’t cloying or overly sweet.

The fruity notes are simply perfect and linger for just a second before melting into spice and a touch of bitterness. Duvel is a shining example of Belgian beer culture and one that you should not miss!

Blanche De Bruxelles is a standout Belgian beer because of its innovative use of key ingredients, specifically orange peel, and coriander.

It’s a witbier with a lot of character, and at only 4.5 percent alcohol by volume, you’ll feel comfortable having a pint or two on a warm summer’s day. But, of course, the shining star of Blanche De Bruxelles is the high-quality wheat that makes up the beer’s base.

Blanche De Bruxelles might be a lighter beer, but that doesn’t make it any less complex. These flavors mingle together expertly on the palate and finish with a crisp, slightly bitter end.

Blanche De Bruxelles is a solid choice if you’re new to Belgian beers and want to try something spectacular.

Brouwerij Rodenbach is a household name for many Belgian beer lovers, but even the most knowledgeable ones might not have heard of “Alexander.”

This beer wasn’t one of Rodenbach’s premiere offerings, but now that it’s come out of obscurity, people are raving. Alexander is a sour cherry beer that expertly walks the line between sweet and sour.

It’s a Flemish-style beer with a deep brown body and substantial head. Although it’s a sour, it’s very drinkable as it doesn’t veer too far into vinegary territory, like some other sours tend to do.

Alexander is aromatic with beautiful notes of oak and vanilla. We taste bitter chocolate and caramel sweetness at first, then a lovely burst of sour cherry followed by a final note of sweetness.

If you’re unsure if sours are for you, Rodenbach Alexander is a brilliant place to start your sour journey.

Houblon Chouffe Dobbelen IPA Tripel might just be the Holy Grail of IPAs. This nine percent IPA is a fantastic example of the style.

With a deep golden body that borders almost on amber, Houblon Chouffe Dobbelen IPA Triple is a good-looking beer. But that’s just the start.

It’s aromatically intriguing with distinct notes of lemongrass and banana, plus a deep earthy richness that prevents it from being a one-note beer.

This perfect beer has many different flavors and notes, but they all seem to work together in harmony. That alone is enough to give it a key spot on our list of best Belgian beers.

Prepare yourself for a fruity blend of apples, bananas, and pears. You’ll also get notes of bell pepper, spice, grassiness, and fresh grains.

Remarkably, all of these flavors amplify each other and combine to form what’s arguably one of the best IPAs on the planet.

Orval is a Trappist beer, which means Trappist monks in Belgium brew it. Monk beer is notoriously delicious, and Orval certainly fits the bill with bitter, citrus, and hoppy notes.

It’s also got a bit of a funky flavor, thanks to its long fermentation process. The funk balances out the citrusy notes and makes it an outstanding beer in both complexity and taste.

Orval uses Bavarian hops as a base and incorporates dry hopping into their brewing process. Dry hopping produces a slightly bitter but not over-the-top finish.

Your first sip of Orval could yield a lot of fruity notes, and we picked up a massive hit of coriander. As you drink, more flavors will emerge; tart fruit, earthiness, and Orval’s signature bitter bite.

It’s a dry beer that hits that coveted mark between being too bitter and too sweet from the fruit. Orval is just right, which is precisely what makes it a cult classic.

Fortunately, you can get your hands on Orval just about anywhere. So stock up and sip it anytime.