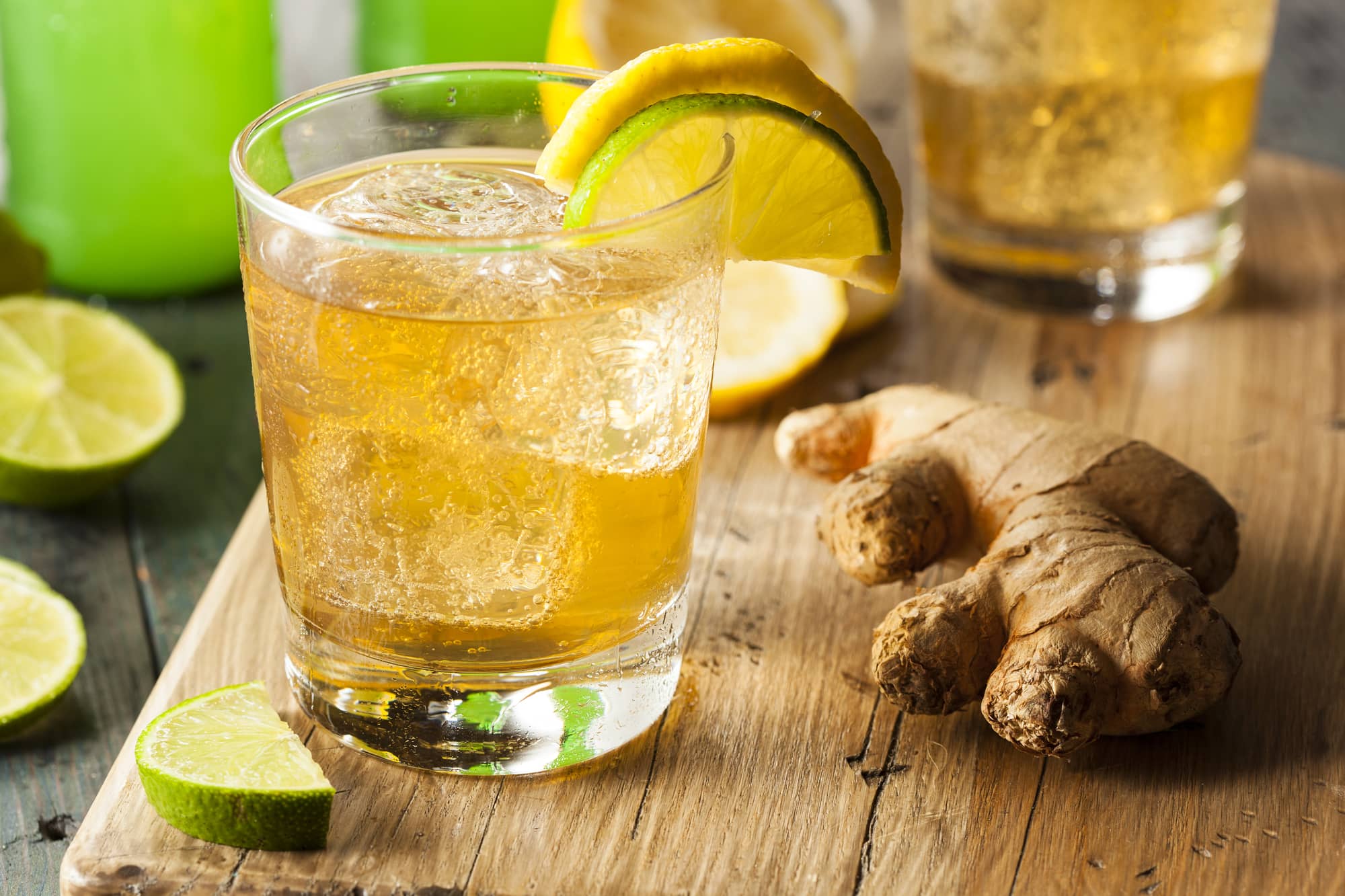 So you’ve got a taste for home brewing your beer, and now you want to take a crack at learning how to make an alcoholic version of ginger beer. Cue the drool because it’s so yummy!

The best thing about making your own ginger beer isn’t just the taste; it’s actually really good for your gut. It’s not only rich in vitamins and minerals, but if made correctly, it’s chock full of probiotics.

Would you be surprised if I told you that many ginger beer recipes don’t create alcoholic beer? They’re more like the ginger ale soda you buy at the grocery store. But we’re all about making award-winning beer around here, so I’m going to show you how to make authentic alcoholic ginger beer.

This ginger beer recipe makes about one and a half gallons.

Here are the Ingredients

Bring a large pot of water (about ¾ of a gallon) to a boil.

Roughly chop your raw ginger root and the zest of one lemon and throw that into the hot water. Cut your lemon in half and squeeze all the juice into the water. Squeeze it until there’s nothing left but the skin.

Add in about 3 ½ cups of white sugar. Stir it up and turn off the heat after a minute or two.

Keep the lid on and let it sit and cool overnight.

Fast forward to day two, and start the fermentation process.

Use your large funnel and carefully pour the ginger brew into one of the empty one-gallon bottles. Don’t bother straining this; you want all the ginger and lemon chunks to go with it.

Add some room temperature water or ice water if the mixture is still warm. Add additional water until the bottle is almost full but with some room at the top (about four fingers).

If the mixture is too warm, it will kill the yeast and ruin your entire batch, so make sure it’s just lukewarm.

Grab a teaspoon and add in your cream of tartar, champagne yeast, and yeast nutrition.

Top the bottle with your bubbler or balloon — don’t forget to poke a hole in the balloon — and set it in a warm place.

Once your ginger beer completes fermentation, use the large funnel and cheesecloth to strain the fermented mixture into the second one-gallon bottle. It’s ok if some of the yeast ends up in the strained mixture so long as most of it gets filtered out.

Once it’s strained, it’s ready to bottle up.

For this part, it doesn’t matter what size bottles you use for your finished alcoholic ginger beer. What’s important is that the remaining sugar is distributed evenly and that at least one of the bottles is a squeezable plastic. You want to make sure you have at least one squeezable bottle because that’s how you test the fizzy-ness of the beer.

So, for example, if you’re using four 1.5 liter plastic soda bottles, distribute the leftover (roughly 2 cups total) of sugar into these bottles using the smaller funnel.

Distribute the fermented ginger beer into the bottles evenly and cap them tightly.

Shake the bottles until the sugar is fully dissolved and doesn’t settle into the bottom anymore.

Who wants a flat beer? No one. Let’s hope the answer is no one. So here’s how you raise the carbonation levels in your alcoholic ginger beer.

Once your bottles are thoroughly mixed and there is no sugar settling in the bottom, store your bottles in a warm place again. The new sugar you added is going to ferment, causing the beer to carbonate.

The carbonation process may take a day or two. You can check when it’s ready by squeezing the bottle. Once the bottle is firm and not “squishy” anymore, it’s ready.

Now you can store it in the fridge to stop any more fermentation. Once it’s cold, you can enjoy your homebrew alcoholic ginger beer!

Yes! Ginger beer is rich in minerals and vitamins, including potassium, magnesium, copper, and even vitamin B6. And after fermentation, it contains probiotics which are great for your gut.

Does ginger beer need to be fermented?

To make it alcoholic, yes. If you follow the instructions above, you should end up with bottles of delicious brew with an alcohol content of around 6% ABV.

Does ginger make you poop?

Yep! Due to the probiotics from fermentation, it will get things moving in your gut. Ginger is also great for soothing an upset tummy.

How do I know how alcoholic my ginger beer is?

You can use a hydrometer tool to figure out how much alcohol volume is in your batch of beer.

How To Make A Beer Tap Handle