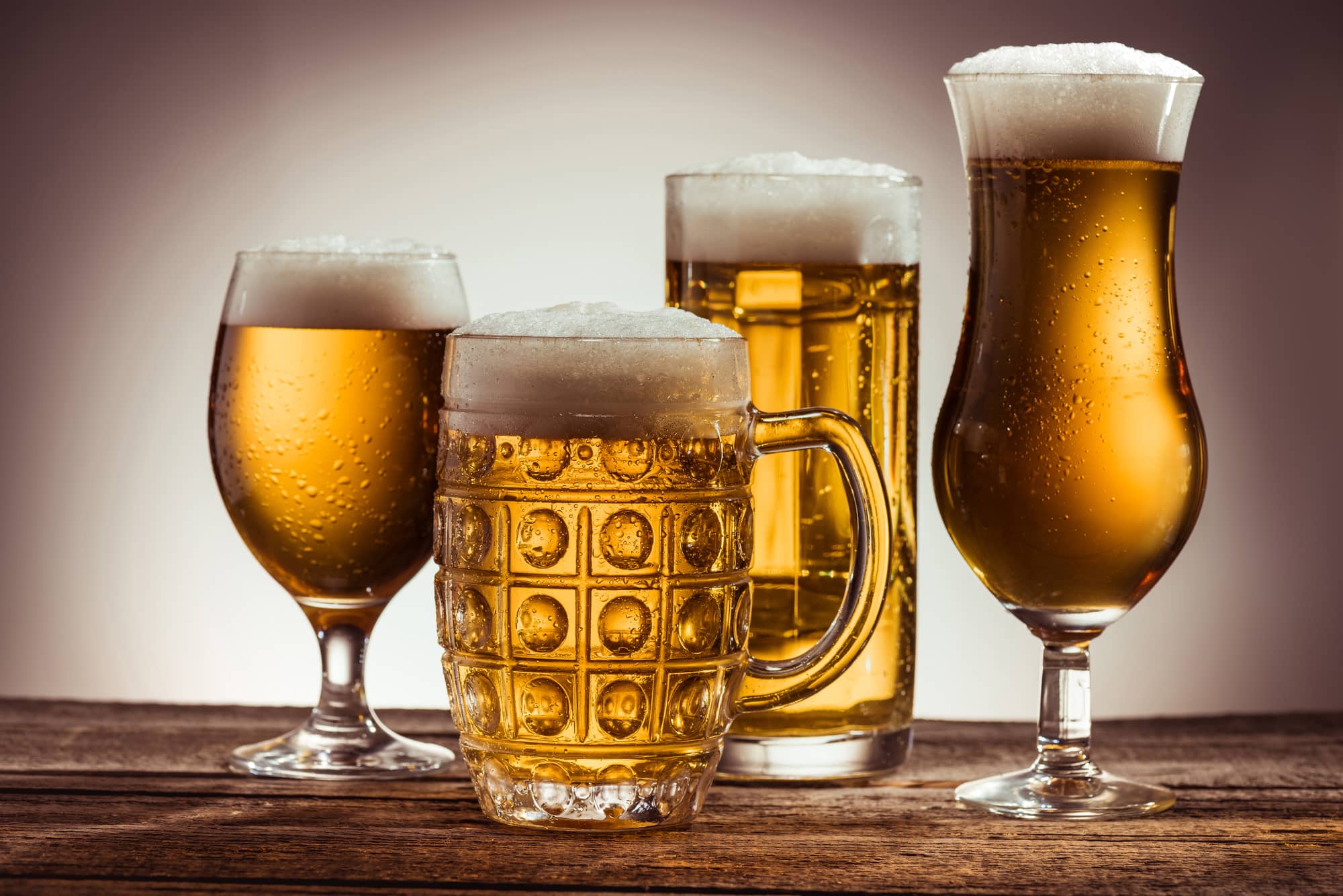 There’s a world of craft beers available, each brewed by artisans. Double IPAs, porters, stouts, pale lagers, and Pilsners are just the start of the delicious beers on the market today.

If you take pride in your favorite beers, enjoy them to the fullest. Don’t just drink them from a long-neck bottle or aluminum can.

Pour your favorite beer into the correct type of beer glass. Just as there are wine glasses designed for sparkling, red, and white wines, there are different types of beer glasses, each created to bring out the best of a particular style of beer.

Once you use the right glasses for your adult beverage, you’ll never go back to drinking a beer out of a plain old aluminum can.

Why Have Different Glasses for Beers?

If you think your beer glass options are pints and mugs, think again. While those types of glasses do the job of holding liquid, multiple types of beer glasses make the most of the beer-drinking experience. Here are some reasons why having the right beer glass types for your favorite beers enhances your enjoyment of them.

The looks of a tall glass of beer are part of the beer-drinking experience. Pouring a beer in a glass designed for it will have you tasting it with your eyes before the first sip. If you’re going to serve a beer, make it look its best, whether entertaining or just having a beer on your own.

The aroma of a craft beer is part of the flavor experience. Specially designed beer glasses make the most of a beer’s scent and flavor profile. An IPA’s citrus aroma, the malty scents of darker beers, and the hoppy fragrance of many stronger beers are all part of the enjoyment of beer.

The shape of some beer glasses can retain the head, which can be part of the beer-drinking experience, especially with dark beers. The variations of color between the beer and its head and the aroma in the head make this a key part of the glass design.

Before you crack open a cold one, take the time to learn about the wide variety of beer glasses and how they can add to your beer-drinking enjoyment.

Also known as traditional pints, these 16-ounce glasses get their name from the amount of beer they hold. These glasses have a cylindrical shape and are seen in bars and restaurants and, most likely, your kitchen cabinets. They don’t add to the beer’s flavors, but they don’t detract from them, either.

The Imperial pint glass, or English pint glass,  holds 20 fluid ounces of beer, not 16. This common glassware has a ridge and a lip near the top. This glass is your go-to for British ales and lagers such as India pale ales, red ales, brown ales, porters, and dry stouts.

Also called a Belgian glass, this footed vessel takes the shape of a tulip with a bulbous bottom and a flared lip at the top. A tulip glass, or tulip pint, has a wide bowl that is designed to make the most of the aroma and flavor of malty, hoppy beers. Use them to serve beers such as Saisons, Scottish ales, Belgian IPAs and dark ales, and Biere de Garde.

A Pilsner glass is long, slim, and elegant. A conical glass that is slightly wider at the top, these glasses are made for lighter beers, including Pilsners, of course. Blonde ales, Helles bock, and Vienna lagers are also served well in these glasses. Like champagne flute glasses for sparkling wines, the elongated shape of this glass and the wider mouth make the bubbliness of beer last longer.

These footed glasses with a large round, bulb-like bowl make the most of dark beers such as Belgian IPAs, bocks, dubbels, and tripels. The wide mouth allows the beer drinker to appreciate the aroma and flavor of these dark beers.

The ridges at the bottom of an IPA glass aerate the beer each time you take a sip. The ridges and bowl of this glass accentuate the citrusy scents of IPAs. Some IPA glasses are also etched to boost the carbonation of the beer.

Made in the shape of Scotland’s national flower, the thistle glass is footed like the tulip glass, but its bulb is smaller and the lip more flared than the tulip glass. With a thistle shape, this glass is perfect for Scotch ales.

A tall Weizen beer glass makes the most of its namesake beers and any wheat beer, using their narrow shape to show off the golden color and making carbonation last longer. These glasses are best for wheat ales, dunkelweizens, hefeweizens, kristalweizens and weizenbocks. The curved lip at the top helps retain the foam head, allowing better enjoyment of the beers’ fragrances.

The round bowl and narrow base of a stout glass release the chocolatey coffee scents of stouts. You can serve all varieties of stouts, such as milk stouts, coffee stouts, and oatmeal stouts, elegantly in this specialized glass.

A beverage container invented during the years of the plague, the lid of a German beer stein keeps out flies. Today, most beer steins are decorative and not used for drinking beer.

With hearty, thick glass walls and a handy handle, this common type of beer mug holds plenty of beer, which is a plus. They are the usual beer drinking glass seen at beer festivals. Great for Pilsners, lagers, and ales, you can keep these popular beer glasses in the freezer until you’re ready to pour the beer to give them a layer of frost and keep your beer even colder.

Beer just tastes better when it’s poured into a glass. Not only does beer look better when served in a glass, but the proper glassware will also enhance the carbonation, aroma, and flavor of craft beers.

These artisanal beers have complex flavors that you can more fully appreciate when using the right glass for the beer you’re pouring.

If you’re a craft beer lover, having beer glasses designed for your favorite types of beer should be considered essential barware in your home. Whether entertaining or just enjoying a beer at home after work, the right glasses will make the most of your brews.

How To Make A Beer Tap Handle

Best Beer On Tap: An Option For Every Type Of Beer Lover